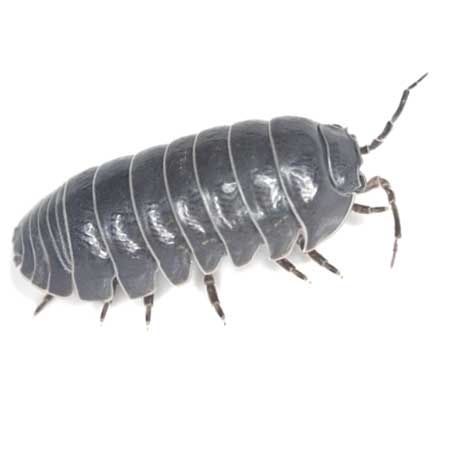 Pillbugs go by many names – armadillo bug, potato bug, roly poly & wood louse,  – but whatever you call it, it’s a interesting creature that finds its way into your home. These 7 facts about pillbugs will give you a new insight on the “bug”.

Although often associated with insects and are referred to as “bugs,” pillbugs actually belong to the subphylum Crustacea. They’re much more closely related to shrimp and crayfish than to any kind of insect.

2. Pillbug moms carry their eggs in a pouch.

Like other crustaceans, pillbugs carry their eggs around with them. Overlapping thoracic plates form a special pouch, called a marsupium, on the pillbug’s underside. Upon hatching, the tiny juvenile pillbugs remain in the pouch for several days before leaving to explore the world on their own.

Most animals need to convert their wastes, which are high in ammonia, into urea before it can be excreted from the body. But pillbugs have an amazing ability to tolerate ammonia gas, which they can pass directly through their exoskeleton. So, there’s no need for them to urinate.

Like their marine kin, terrestrial pillbugs use gill-like structures to exchange gases. They require moist environments to breathe, but cannot survive being submerged in water.

Most kids have poked a pillbug to watch it roll up into a tight ball. Many people call them roly polies for just this reason. Its ability to curl up distinguishes the pillbug from another close relative, the sowbug.

Pillbugs can indeed contract viral infections. If you find a pillbug that looks bright blue or purple, it’s a sign of an iridovirus. Reflected light from the virus causes the cyan color.

How long do pill bugs live?

How do pill bugs get in the house?

Do pill bugs die in winter?

How long do pill bugs live?

What do pill bugs eat?

The official start of summer is just a couple weeks away. Along with the summer heat, Tucson and surrounding areas will be inundated with pests. Here are some of the top bugs to look out for now that the temperatures are rising. 1. Africanized bees Out of all of Arizona's venomous creatures, Africanized bees are […]

Essential Pest Control takes care of all of your toughest pest control needs with science! Creating better environments for friends and family while eliminating the source of household pest problems. At Essential Pest Control, we create customized programs for the individual homeowner in order to effectively eliminate your pest problems! The program focuses on eliminating […]