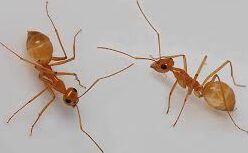 With more than 12,000 known ant species around the world, ants have made their mark in the deserts of Arizona. Housing over 300 known species, Arizona has the highest diversity of ants in the United States.

In nests of honey-pot ants, living food jars up to about half an inch across cling to the ceilings of underground cavities. On the surface, they are best recognized by their erratic, stop-and-go movements.

As with most types of ants, adult workers feed immature larvae by regurgitating liquid food. Honey-pot species take that two steps further. Workers forage outside the nest for plant juices and other foods, then feed sweet liquid to a specialized group of adult workers called "repletes." The repletes swell into berry-like spheres to store honey for sustaining the colony through the lean season. They hold up to eight times their body weight in honey, but can barely move.

Seed harvesters are found in back yards and deserts. The two, formerly cooperative foundresses of the ant species Messor pergandei, are engaged in lethal combat. Such fights begin soon after the first adult workers appear in the nest and result in the demise of all but one of the original foundresses.

"Pogo" workers grow to about half an inch and range from red to black. They forage up to about 100 feet from their nests, which are conspicuous bare-soil circles with a central opening.

Queens may live more than 20 years, continuing to lay eggs from a single mating flight. But once individual workers begin foraging outside the nest, lizards, birds, dehydration or other hazards are likely to kill them within a month. Younger workers are continually tending new batches of eggs. As workers get older, they become expendable foragers instead of larva-tenders.

Tens of thousands of ants may cooperate as a single colony. Winged reproductive forms, males and virgin queens, fly after summer rains. After mating, the males promptly die and the queens try to start their own colonies. A tiny percentage succeed.

These shiny ants, either black or red, are common in yards and pack a nasty sting. Most are only about one-eighth of an inch long. The Arizona Department of Agriculture has so far been successful at keeping Arizona free of the local fire ants' South American cousins, red imported fire ants, which have infested states from Florida to Texas.

Army ants attack other ants' nests not to steal babies, but to eat them. The ones in and around the Valley are nearly blind. Tens of thousands of them may form raiding columns during nighttime raids, eating whatever other insects they come across. An Army ant colony does not build a permanent nest. It moves as a group from place to place to find new food supplies, using temporary shelters such as rodent holes.

If you are noticing you have an ant problem, don't hesitate to contact Essential Pest Control to handle it. Call 520-886-3029 today for a free inspection.

Every Fall and Winter season, 21 million U.S. homes are invaded by rodents moving indoors in search of food and shelter. Mice and rats are capable of transmitting diseases as well as damaging property. This makes rodents a health and property threat. Rodents can cause property damage by chewing through drywall, insulation and wiring in […]

3 Things in Your Garage that Bring Rodents

Clutter It is often hard to resist using your garage space as storage overflow, but creating chaotic piles—especially along walls or in corners—lays the right conditions for mice and other rodents to move right in. Even if you're not the type to keep odds and ends where you park your car, keep in mind that useful seasonal […]