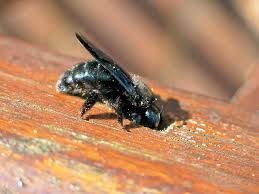 Identifying Bees On Your Property

Without bees, it would be tough to grow enough food to feed humanity. They are nature’s essential pollinators. But they can also become problematic, particularly if large numbers of bees move onto your property. If you identify a nest of bees, it may be time to call a pest control company, especially if someone in your family is allergic to bee stings. This is also important for business owners, as having someone get stung on your property may become a liability issue.

There are many different species of bees and wasps, but there are a few defining characteristics that you can look for. Wasps tend to have a narrow waist and bright colors, along with four wings. In contrast, bees have a rounder, more uniform body. They’re also hairy and tend to feature brown or black coloration.

Honeybees are agriculture’s best friend. While they aren’t as aggressive as wasps, a honeybee can still sting if it feels that its hive is threatened. Honeybees are about half an inch long. All honeybees have stingers. Along their bodies, most honeybees have black stripes that alternate with amber or yellowish stripes.

Carpenter bees are among the most common types found in the U.S. They can be anywhere from half an inch to an inch long. These bees tend to hibernate during the winter. They’re more visible during the spring when they mate. The female of the species does not sting humans very often, and the male lacks a stinger entirely.

Bumblebees are among the largest of bees. While they can be about as long as a carpenter bee, they typically look much plumper. Bumblebees have very fuzzy bodies.

The different species of bees like to nest in various places. Honeybees often like to build their hives in trees. Carpenter bees can also build in trees, but they especially like to infest buildings. They drill into wood in order to build a safe place to raise their young. This is why you’ll often see carpenter bees flying around the eaves of buildings. Bumblebees usually have relatively small colonies. They are opportunists who will build in abandoned rodent homes, wood piles, or gaps in the siding on buildings.

Beehives may threaten the safety of your family or customers, and they may even grow heavy enough to damage the building. Let the experts at Essential Pest Control handle any problem with bees on your property for you. You can reach us at (520) 886-3029 to request the removal of a beehive in Marana, Tucson, or the surrounding areas.

A Desert Centipede finds itself caught in the web of a black widow spider. It looks like the spider is in control and she will take the victory. If you are noticing activity from spiders, centipedes or any other pests in and around your home, Give us a call. Essential Pest Control | 520-886-3029 | […]

The official start of summer is just a couple weeks away. Along with the summer heat, Tucson and surrounding areas will be inundated with pests. Here are some of the top bugs to look out for now that the temperatures are rising. 1. Africanized bees Out of all of Arizona's venomous creatures, Africanized bees are […]